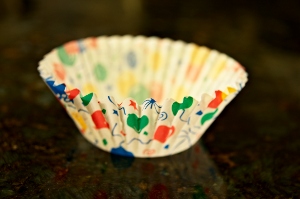 Remember those balloon-covered paper cupcake liners that were a staple at every kindergarten classroom party? Ah, yes. Those paper cups of wonder whose ruffled edges clung tightly to chocolate and vanilla cupcakes, leaving ridges in the frosting overlay and little hands eager to peel away the paper. Today, cupcake holders have become fancy-shmancy, often formal enough to use at weddings with nary a wedding cake in sight. So it should come as no surprise that outside of the party scene, paper cupcake holders do what they do best…they hold their own. Following are five uses for those paper cupcake liners hanging around in your kitchen “baking supplies” drawer:

1. Separating frozen food items. Want to freeze multiple burger patties or similar-sized items in a large freezer bag? Separate each patty using flattened cupcake liners. The liners are approximately the same size as the burgers, and you’ll save time on cutting appropriately-sized parchment paper or plastic wrap as separators.

2. Organizing beads, nails, screws, and other items when doing a project. Beads of a color (and similar nails, screws, etc.) should stick together.  These items can be used with ease when sorted in individual paper cupcake liners. (Bonus: The liners can be re-used for a variety of non-food related items!)

3. Keeping track of your daughter’s hair clips. Line a small muffin tin with paper cupcake holders and encourage your daughter to sort her hair accessories in the cupcake liners, putting clips in one cupcake liner, hair ties in another, etc. Individual liners can be taken out of the tin to help make the early morning “getting ready” routine a breeze (and – bonus! – they can be re-used for non-food related items!)

4. Making finger-painting fun for you and the kids. Minimize the mess by lining an old muffin tin with paper cupcake holders and filling them with finger paints. This will help keep the paints contained while giving the kids plenty of lee-way for fun (and when the painting extravaganza is over, the cupcake liners can be reused at least once more for the same purpose!)

5. Serving snacks to family and friends. Want to serve snacks to your toddler’s play group or to the crowd watching ESPN in your living room? Divide snack foods into paper cupcake liners. These liners double as snack plates and are a fun way to serve a variety of noshing favorites. (And the liners can be reused for snack time in the future!)

Do you have a creative use for paper cupcake liners? Let us know!

Tips From a Novice Gift Wrapper
I am a gift wrapping novice. 'Tis true. Recently a...
Just Between Us and Mary Poppins
Shockingly enough, I absolutely love the scene in ...
Three Tips for the Savvy Shredder
The home office shredder is a great device for any...
Tagged with → beads • cupcakes • finger painting • frozen foods • hair accessories • nails • paper cupcake liners • screws • snacks
Storing Your Farmers’ Market Selections Shoe Holders That Go the Extra Mile
Logging In...